HISTORY OF OUR SCHOOL

Jacques Pienaar Primary was named after an accomplished man, namely J.P. Pienaar. Sixty-Eight years ago he, a small boy, of only five years of age, was lying sick in his bed when he was challenged with fulfilling his grandfather, General J.J. Pienaar footsteps.

He was given a book of remembrance that was signed by all the scholar of Jacques Pienaar Primary, as well as a Meccano-set, which he claims led to his interest in engineering. J.P. Pienaar later then fulfilled his dream, by becoming a mechanical engineer.

Jacques Pienaar found a good role model in his grandfather, as he also wanted to be a great leader. His grandfather, J.J. Pienaar was bore on the 16th of April 1877 in Lady Brand, in the Orange Free State.  Before his twentieth birthday his father passed away.  Johannes was then forced to be the sole provider, which in turn lead him to running their family farm.

Johannes then joined the Anglo-Boere War in 1899. He was promoted to the Field-operator in 1900, where he was then given a flag from the society of Johannesburg. Later he was again promotes to Commander where he fought many battle in the Sabie-Pelgrimsrus area, during which he was wounded twice.

As soon as the war ended he focused on his schooling, where he passed grade 12 through self-study.

After Johannes got married and had three children, he soon again joined the military.  He later became a Major, and he had to proof himself in various battles during the First World War. Major Pienaar went against the believes that the war should be fought in an obligated manner, rather than out of free will, so he resigned from his position. He then decided to manifest himself as the leader of the Rebel Army. His efforts during this time led to the seized of the obligated military duty forced upon soldiers.

When the war ended Major Pienaar decided to focus his interest on Politics. He was soon appointed as the Administrator of Transvaal.  He also expanded his achievements when he assisted in the establishing of the United Party.

During the end of J.J. Pienaar’s political career he also assisted in the establishing of the Andrew McColm Hospital, as well as Generaal Jacques Pienaar Primary School.

Jacques Pienaar Primary was opened in 1941, where the first principal namely Mr. A. Stoffberg started a teaching journey, with only thirteen staff members.

The library was established in 1953 together with a film studio, which grew more popular as the years passed. The school went further by creating fun days, like the schools flower day which was started on 17 October 1958. Not long after that, the school hall was finished and approved by the Transvaal Education Department in 1958.

The inauguration of Generaal Jacques Pienaar’s statue on 14 April 1960 was a big day in the school’s history. The statue was created by Hennie Potgieter. The hot summer days was no longer a problem as a swimming pool was built in 1962, since then gala days were held annually.

By 1970 the first electrical (automated) watch was installed in order for the bell to ring after each period. Only three years later, on the morning of the 10th of August 1973 all the female personal changed their uniforms from dresses to wearing long pants, since the raining season led to extreme gold days. The principle approved the new style, as the female personal had good reason to bring about this modern change to the school. In 1975, The After School Service was created to assist the parents and children that had to traveling from far distances.

The school has grown in much over the years in various areas. The sports and social activities was some of these areas that grew considerably in the 80’s, due to the efforts of Principle S.P. Louwrens. Generaal Jacques Pienaar fashioned a number of pupils that performed nationally in different sports. 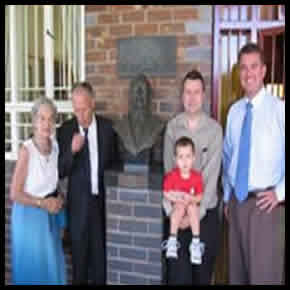